Jump to Recipe Jump to Video
5 from 10 ratings 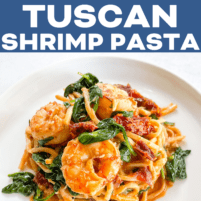 5 Ingredients or Less from Trader Joe’s

I love how much everyone is enjoying this series of 5 ingredient or less recipes! Last week, I shared my recipe for Keto Crispy Verde Chicken Tacos. If you missed it, you can find it here!

This week, I have a new “5 Ingredients or Less from Trader Joe’s” recipe for you: Keto Creamy Tuscan Shrimp Pasta!

Note: You can also watch this recipe video on YouTube.

This pasta gives me ALL THE FEELS! It’s perfect for cozy Fall evenings, busy weeknights, or even lunch in a pinch!

In just 15 minutes, you’ll have the most delicious, satisfying meal. Also, everything cooks in one skillet, which means minimal cleanup. Fewer dishes? Yes, please!

Here are the ingredients I grabbed for this recipe:

In a quick trip to Trader Joe’s, you can grab all these ingredients for $25 and make a meal your whole family will love!

Did you love this recipe? Thank you! Please rate this recipe and leave a review below. I respond to every one! Be sure to follow me on Instagram, Pinterest, TikTok, and Facebook. Tag me if you try a recipe! 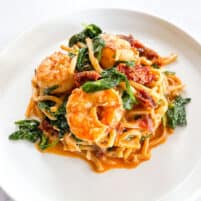 Shrimp: Trader Joe’s Argentinian Red Shrimp is my favorite because it’s wild caught, already has the shell + tail removed, is deveined, plus tastes delicious! But any shrimp would do. Protein: This would also be amazing with italian pork sausage, chicken sausage, chicken thighs, chicken breast, etc. Coconut Cream: I love using canned coconut cream because it has the most amount of fat, and gives me the thickest sauce. You barely taste the coconut once it cooks. If you’re ok with dairy, you could use heavy cream instead! Another great option would be original flavor Nutpods. Hearts of Palm Linguine: Hearts of palm is my favorite keto friendly pasta because it doesn’t get watery when cooking, and holds up really well. You could also use zucchini noodles. Or this would be great served over cauliflower rice! I also love Natural Heaven hearts of palm pasta (code TASTESLOVELY for 15% off) Reheating: I would reheat this in a cast iron skillet, or microwave for 3 minutes.
Cuisine: Italian
Course: Main Course
Author: Natalie
Calories: 188, Total Carbs: 15.1g, Protein: 12g, Fat: 8.2g, Fiber: 2.3g, Net Carbs: 13g
Did you make this recipe?Please Leave a comment and give this recipe a rating!
15 Minutes 5 Ingredients or Less Dairy Free Entrees Fall Gluten Free Keto Low Calorie Meat Paleo Pastas Recipes Seafood Spring Summer Whole30 Winter